“A Fight For Us All”: How Companies Took Action Against Racial Injustice This Week And What You Should Do

I’m writing this article a few minutes before I head out to a protest in New York. It’s been a rough few weeks, and I wasn’t sure I wanted to contribute my take on social media today. I’m very close to Black Lives Matter and, being half black, civil rights issues are extremely personal to me. Ultimately, I decided I still wanted to contribute.

What typically was only a fight for African Americans has become a fight for us all. First, non-black allies in the United States responded to the call in several ways, including on social media and out in the streets. This week, we’ve seen the movement spread to allies from all walks of life across the globe.

Digital platforms play integral roles in small businesses, and we have reached a point where consumers demand to publicly hear from company leadership to acknowledge racial inequities and pursue strategies addressing them. As brands consider how they can better their operations and the world, here are a few interesting and insightful articles and initiatives instructive about the paths to follow and avoid.

In an article for Fast Company, Linda Ong, chief culture officer of Civic Entertainment Group, reasons that, if brands could be helpful voices amid the pandemic, they should be helpful voices in the fight against racial intolerance. “We need brands to behave like activists — to be fiery, passionate advocates campaigning for social action,” she writes. “As a first step, marketers can take the same playbook they used for the novel coronavirus, and apply it to the current crisis.” Ong suggests brand executives ask themselves about how they can adjust their businesses to tackle the challenge without regard to profit, direct customers to take action, provide empathy and support employees. To learn more about Ong’s perspective, here’s a video she participated in. 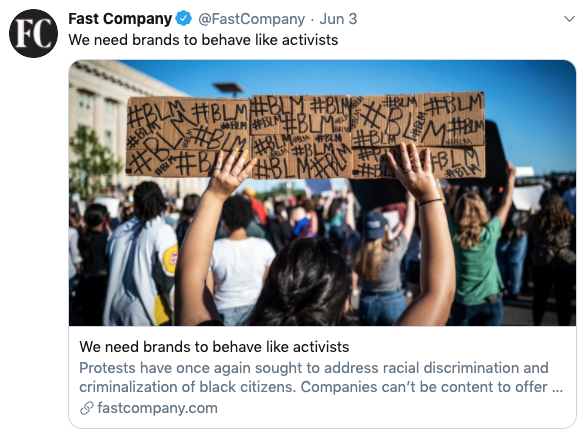 Not only have they turned profile pictures to black versions of their logos, but social media platforms are putting their money where their posts are. YouTube is pledging $1 million in support of efforts to address social injustice.

Twitter changed its profile to honor Black Lives Matter and retweeted a thread from @TwitterTogether with content on racism and measures combatting it. 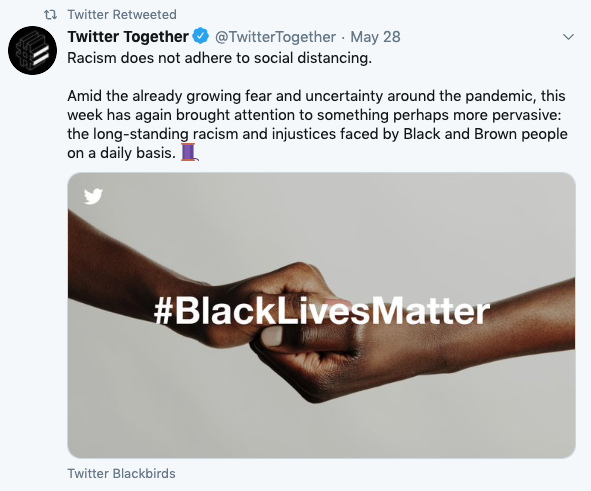 TikTok’s general manager Vanessa Pappas and Kudzi Chikumbu, director of creator community, wrote a letter to users. In it, they said, “To our Black community: We want you to know that we hear you and we care about your experiences on TikTok.” They also detailed steps TikTok is taking such as establishing a creator diversity council, impact-driven programs and creator portal to expand communications. 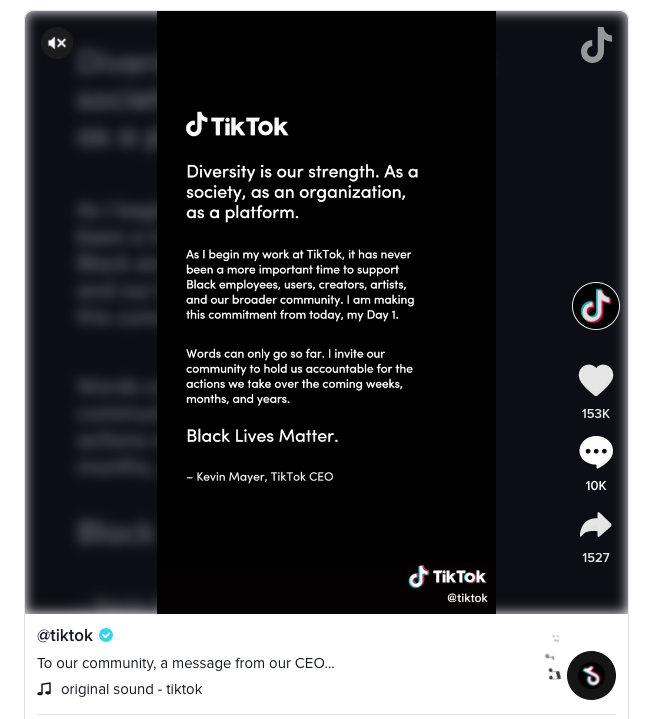 In his letter, Pinterest CEO Ben Silbermann wrote, “We heard directly from our Black employees about the pain and fear they feel every day living in America.” He outlined Pinterest will elevate racial justice content, work to make sure content features people from an array of backgrounds, focus on diversifying senior leadership, increase manager training on race and donate to organizations supporting racial justice.

LinkedIn posted a statement about standing with colleagues in the black community, but was called out for not taking action. The company has since responded by mentioning it’s listening and highlighting black voices. It said, “Being a strong ally begins with listening, so we are sharing stories to amplify perspectives from the Black community.” 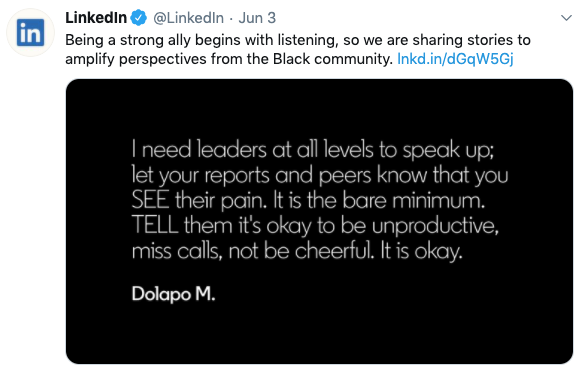 Instagram and Facebook have pledged to donate $10 million to efforts committed to ending racial injustice. However, Instagram was criticized for posts with the hashtag #BlackLivesMatter being restricted, and employees at Facebook staged a virtual walkout to express their outrage at the social media giant allowing President Donald Trump to post incendiary language unabated. 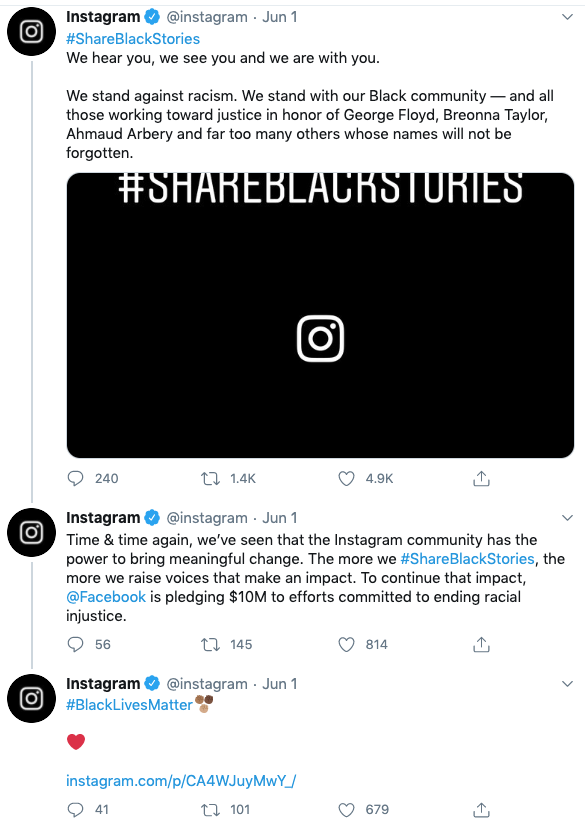 #BlackoutTuesday began as an attempt by Jamila Thomas and Brianna Agyemang, two black women in music marketing, to break with business as usual in the music industry, but virally turned into streams of black boxes. Journalist Joe Coscarelli chronicles how their initiative morphed into a broad social media phenomenon and led to issues with silencing #BlackLivesMatter posts. Uoma Beauty founder Sharon Chuter wants to create change in the beauty industry that lasts beyond a single day. She’s introduced the #PullUpOrShutUp campaign to raise awareness about the dearth of black executives at beauty companies. The campaign asks beauty companies to release the number of black people they have in leadership roles. 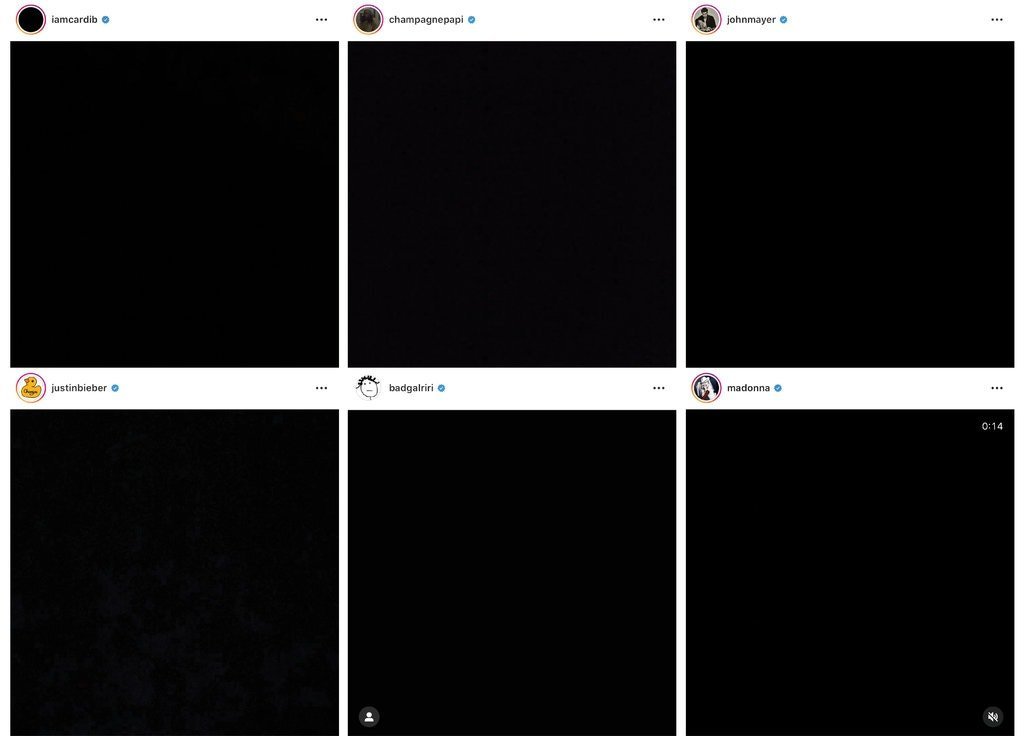 4. Still Confused About What To Do?

Many brands still seem to be struggling with what to do during this critical moment. When in doubt, pause, research and get educated. Consider posting a raw statement from leadership recognizing the importance of racial injustice and progressing by taking action to fight it. Your followers and valued customers will appreciate you expressing solidarity and hold you accountable to your word. Here are some suggestions Later shared.

Today is about listening, learning and ?????? ????-???? ??????. About creating space and amplifying the voices of Black communities. ⁠⠀ ⁠⠀ Here are some steps we’ve found helpful for taking action as a business:⁠⠀ ⁠⠀ • Start with doing the work yourself.⁠⠀ • Make a donation and share a fundraiser.⁠⠀ • Pause your social ads, advertising can wait.⁠⠀ • Engage with your community, encourage dialogue and accept that you have a lot to learn (we at Later are no exception).⁠⠀ • Be mindful with your hashtags (support black lives matter, but don’t crowd the hashtag)⁠⠀ • Diversify your feed. When you find a BIPOC account that teaches you something, opens your mind, or moves you — share it with your followers.⁠⠀ ⁠⠀ (Link in bio for more ways you can take action)⁠⠀ ⁠⠀ ? : @brianmeller