Nathan Failla was more stressed than he’d ever been in his 23 years of life. Studying for exams at Duquesne University, which Failla graduated a year before, didn’t come close to the pressure he was under to deliver a compelling pitch for his brand, PocketGel, to two Walmart buyers during the massive retailer’s fourth annual U.S. Manufacturing Open Call event. 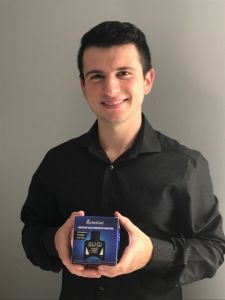 “It was one big shot for me to get into Walmart stores and expand the way I wanted to,” says Failla. “For me, there was a lot riding on it. I wasn’t going to give up if I didn’t get in, but it was a huge door to get to the next level.”

That big shot lasted a grand total of an hour in a small room in Walmart’s Bentonville, Ark., headquarters with four chairs and a desk. Failla pulled out his brand’s products, pocket-sized containers with 5 milliliters of hair gel, and touted their portability (perfect for TSA screening and stuffing into gym bags!) and green positioning. PocketGel’s packets are made from sustainably sourced paper, leave behind 1% residual waste compared to 20% to 30% for bottles, and use 50% less packaging materials than bottles.

Shortly after Failla presented to the buyers, the verdict was in: PocketGel was approved for 500 Walmart doors. On top of the physical locations, the brand is launching on Walmart’s website, a gateway to Walmart customers offered to all the 500-plus entrepreneurs invited to Open Call on June 28.

“They really liked the eco-friendliness. I don’t use plastic in my packaging. That was a big factor in them buying it,” says Failla. “They wanted something different that wasn’t in Walmart stores, and they really want companies that can manufacture on the scale that Walmart needs, which I have the ability to do.”

Although PocketGel has only been sold online to date—at Sears.com and on PocketGel’s site—Failla generally purchases his own personal care products at brick-and-mortar shops, and believes a physical presence will lift his brand online as well as offline. “When you are in stores, people begin to recognize the brand, so when they go online, it sticks out in their minds,” he says.

Failla’s stress hasn’t fully subsided since his Bentonville triumph. There’s a ton of work to be done to prepare PocketGel to roll out to Walmart stores. Guided by advice from the buyers, Failla has to settle on a price for his products that’s right for Walmart shoppers. “It will be competitive with other styling products Walmart sells,” he reasons.

“They wanted something different that wasn’t in Walmart stores, and they really want companies that can manufacture on the scale that Walmart needs, which I have the ability to do.”

Failla also has to pay to have enough PocketGel merchandise manufactured to satisfy the demand from Walmart. He poured $10,000 of his savings into getting the brand off the ground, but he’ll need an amount much greater than that—he declined to divulge how much and is in the process of securing funding—to supply 500 doors and Walmart.com. PocketGel manufactures in Michigan and is based in Pittsburgh.

Failla’s aware he’s young to land a major Walmart deal. He’s convinced his youth and perhaps a dash of naiveté were advantages. “There have been a lot of moments where I should probably have been discouraged. When you are younger, you don’t have any real business experience to discourage you,” he supposes. “You take it one step at a time even if it looks like there are a million obstacles.”