Teadora Adds A Touch Of Brazil To Seattle’s Pacific Place

The Teadora experience is on full display at Pacific Place in Seattle, but it won’t be for long.

“It’s a really great avenue to have direct consumer feedback and product trials, which can be harder in traditional channels because it takes so long to get into them,” says Teadora founder Valeria Cole. “The traditional retail channels are very much focused on bigger brands and brands that sell everywhere, and there’s a huge opportunity in the interest consumers have in naturals and local alternatives.”

The pop-up isn’t Cole’s first foray into retail, although prior to launching Teadora in 2015 she minded storefronts for tech companies and not a beauty business. She worked with Palm Inc. putting 100 pop-ups into airports and malls, and helped open more than 300 freestanding retail stores and shop-in-shop spaces for Apple, where cultivating an exciting and informative environment was the paramount selling tool. 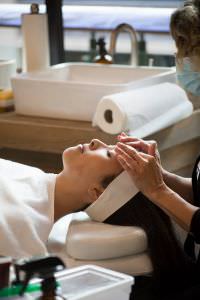 One key takeaway from Cole’s time at tech retail translatable to Teadora is that hard selling doesn’t fly with shoppers. At the Pacific Place pop-up, customer communication concentrates on the powerful performance of natural skincare, the unique ingredients in Teadora’s products (they’re loaded with active compounds from Brazil such as acai, buriti, andiroba, pitanga and babassu), and the versatility of the brand’s multipurpose formulas.

“When we were selling Macs before the iPhone came out, it was all about the different components in the product that made the product better. It was assisted selling. That assisted selling component – the education and events going on in the store – is part of the reason prestige has done well in the U.S. outside of Amazon,” says Cole. There are three employees at Teadora’s pop-up charged with handing assisted selling with aplomb.

Getting customers to pay attention today isn’t the easiest task. Cole acknowledged mall traffic isn’t always stellar, and people aren’t browsing like they once did. “It’s harder to engage with consumers. They are always on their phones,” says Cole. “Sales are improving, and I’m still very hopeful we will be able to cover the cost and have good learnings.” The cost for the pop-up was roughly $10,000.

Teadora kept expenses down for the temporary store by installing a display it initially assembled as a trade show booth for $20,000. The demands aren’t high for product inventory, and the store stocks a minimum of about 12 units per item. Replenishment is done on an as-needed basis from a nearby warehouse. Sampling needs are significant and around 60 samples are doled out daily at the pop-up with over 1,000 shelled out so far in total.

Besides customer interactions and sales, Cole pinpoints press and investor outreach as goals for the pop-up. The brand largely targeted national press in the past and having a local destination for editors and influencers to congregate helps forge ties with the media in its backyard. To get on the radar of the Seattle investment community, the pop-up location across from Nordstrom’s Seattle flagship gives Teadora excellent visibility.

The brand has also been taking the pulse of pop-up customers on services and select products to determine if it should delve deeper into them. It has placed the Mountain Ninja Beard Oil to gauge the response to men’s merchandise and collaborated with Mineral Fusion to get a sense of what makeup items consumers might want from Teadora should it enter cosmetics. Lip care and sun care are cosmetics categories customers seem to be clamoring for from Teadora.

“The traditional retail channels are very much focused on bigger brands and brands that sell everywhere, and there’s a huge opportunity in the interest consumers have in naturals and local alternatives.”

“Makeup attracts a different crowd, so it’s good to have, and I have gotten a lot of customer buying on our site asking us, “When are you going to have makeup?” notes Cole. “They love that we are carrying makeup at the pop-up.”

Free Mineral Fusion makeup application offered at the pop-up encompasses three looks: chic and simple Gisele Bündchen-inspired The Morning After, slightly dialed-up Alessandra Ambrosio-inspired The Happy Hour, and glamorous Adriana Lima-inspired About Last Night. Teadora skincare products are integrated into the makeup services. Quick 30-minute Brazilian facials are free, too, and performed in a massage chair inside the space that customers can view. “It’s great because a lot of people see it, and it creates fun in the store environment,” says Cole.

Additional pop-ups are in the plans for Teadora, possibly in California, but it’s e-commerce business is really the priority for now. The brand’s digital sales have been increasing fourfold. Cole says, “We are going to continue to grow our product offerings and really focus on areas which we can differentiate ourselves enough to fill white spaces. We are going to continue to push to expand into national retail, but that’s secondary to our digital push.”