Shopify Payments Gateway is getting selective about which retailers can use the service.

Soon after, Bella Vérité came to a crashing halt. On April 21, owner Jessica Yardy received an email from Shopify informing her that access to its payment processing service Shopify Payments Gateway would immediately be cut off, and she’d have to find a new payment processing provider. Bella Vérité closed for more than a week as Yardy scrambled to replace Shopify Payments Gateway and was out thousands of dollars in sales as a result.

“I have never been so mad. I felt like it wasn’t fair. How could they do this? How could I build an entire website for a year and then they decide to shut me down with no notice?” decries Yardy, adding, “I want other merchants to know what is going on so they don’t get blindsided like I did. I was blown away.”

Shopify or its partners have lumped common beauty merchandise such as skincare products with hyaluronic acid, retinol, glycolic acid, kojic acid and vitamin C, skin peels and teeth whiteners into a high-risk pseudo pharmaceuticals category, and Shopify is severing the payments spigot to beauty retail and brand e-commerce sites carrying that merchandise. The exact number of sites affected is uncertain, but beauty e-commerce operations in the United States, Canada and Australia have been dropped from Shopify Payments Gateway and substantial sums of money have been lost.

“They are going after clean beauty,” argued Dickinson. Cockburn says, “Big beauty is threatened by the rise of green beauty. They know they can’t offer the products they offer now with fillers. They won’t be able to offer what these artisans offer and keep the prices low.”

To explain its actions, Shopify directed beauty merchants and Beauty Independent to its terms of service, where it states businesses selling pseudo pharmaceuticals or other products that make health claims are prohibited. Beauty merchandise isn’t specifically spelled out, and merchants are puzzled as to why or how beauty items like vitamin C serum have been deemed pseudo pharmaceuticals. In its email to Yardy, Shopify notes the items in question make health claims.

The merchants forbidden from Shopify Payments Gateway report Shopify may not be to blame. They contend Stripe, the payment software firm Shopify depends on for Shopify Payments Gateway, bears responsibility. Stripe hasn’t responded to a request for comment from Beauty Independent, and its role in grouping beauty merchandise with pseudo pharmaceuticals isn’t known. A Shopify spokeswoman explains Shopify’s list of prohibited products and services is in part defined by Stripe’s terms of service.

“Shopify is a neutral platform, which means that if a merchant’s business and the products it sells are legal in the jurisdiction where it is operating, the merchant is permitted to use Shopify,” writes the spokeswoman Samantha Tam in an email. “However, our payment gateway, Shopify Payments, does not allow pharmaceuticals or pseudo pharmaceuticals. While stores with products like those…are welcome on Shopify, they will require an alternate payments processor. Shopify integrates with many payment gateways and it is not difficult to change payment processors.”

Before being alerted by Shopify, the beauty merchants Beauty Independent interviewed for this article had no idea products on their sites were considered pseudo pharmaceuticals. Once merchants were alerted, they often tried scrubbing their sites of terminology connected with health claims, to no avail. Shopify’s decision to disallow them from its payments service appears to have been quick and final in every case. The company gave merchants no time to 48 hours to change payment processing providers and frequently alerted them on Thursday or Friday with the impending weekend making it challenging to move over to alternative payment processor promptly. 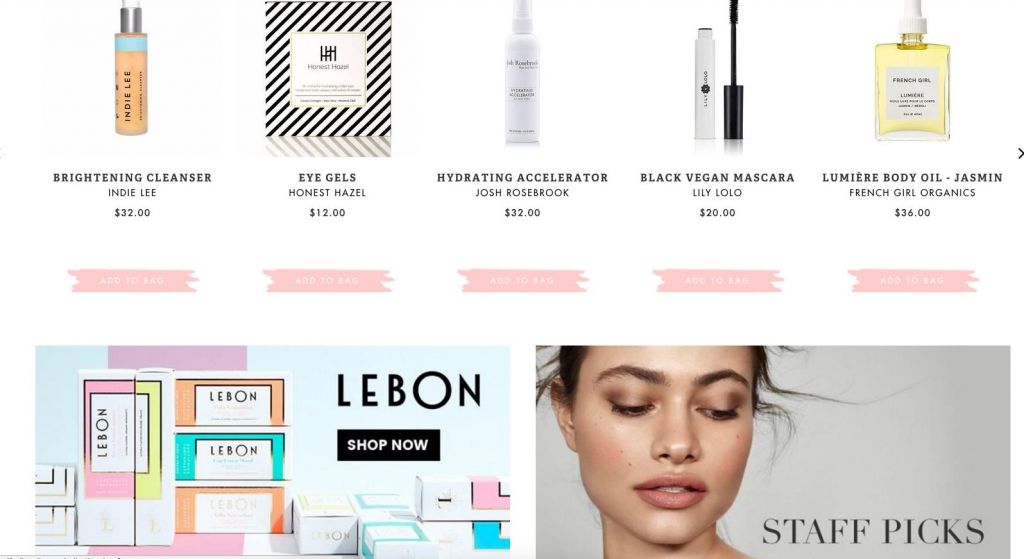 Tangie Griffin, founder of skincare brand Vow Beauty and an attorney, says, “I don’t feel that the disclaimer on their [Shopify’s] website was clear enough for the average user to know that, if they created a Shopify site, they wouldn’t be allowed to use Stripe. They definitely need to revisit their prohibited list.” Shopify suspended Vow Beauty’s use of Shopify Payments Gateway in the spring, and the brand switched to eMerchantBroker.

Amanda Cockburn, founder of Indie Apothecary, was horrified to have goods on her site be categorized as pseudo pharmaceuticals. “That’s not what we associate with. Pseudo means fake and sham. We are by no means pharmaceuticals. We are cosmetics,” she says. She singles out a coconut oil product linked with several benefits, notably teeth whitening, as the product causing Shopify to take Indie Apothecary off the Shopify Payments Gateway, but says Shopify “wouldn’t tell me [that] this is the key word we identified with you.”

Becky Waddell, founder of Take Care, reasons, “It was the ingredients and not the terminology. I tried to be cautious about the way we describe products. I know it’s a risky area.” She remembers the email notifying her that her business would be banned from Shopify Payments Gateway in 48 hours as a complete shock. “They were very rigid and inflexible about their response,” says Waddell. “I have been using Shopify for three years, and we are not offering anything different than we did before.” Take Care opted to end its relationship with Shopify for its website.

“I have never been so mad. I felt like it wasn’t fair. How could they do this? How could I build an entire website for a year and then they decide to shut me down with no notice?” decries Yardy, adding, “I want other merchants to know what is going on so they don’t get blindsided like I did. I was blown away.”

A few beauty merchants discussed chargebacks involving high-risk products as being behind the Shopify Payments Gateway terminations, but they emphasize chargebacks in the beauty segment are rare. The natural beauty retailer Aillea, which employed Shopify Payments Gateway until it was precluded from doing so, has had two chargebacks in two years over thousands of transactions. The two chargebacks were due to credit card theft and had nothing to do with health claims. “It’s never been [that] our product doesn’t work or didn’t performed or deliver,” says Aillea owner Kathryn Dickinson.

The founder of another clean beauty retailer who didn’t want to be named says, “If I were a merchant [payments] processor, I would look into that [natural beauty] segment and say, ‘It’s an amazing opportunity because that’s a segment with almost no chargebacks, happy clients and usually customer service that is good.’” As the situation stands without a processor aimed at natural beauty, the founder advised merchants to obtain a secondary payment processor to avoid losing money if they are removed from their primary payments processor.

Rumors abound that big brands and retailers are pushing Shopify, a firm that touts its service to small- and medium-sized businesses, or its partners to target upstart competitors. These rumors are based on the premise that Shopify Payments Gateway remains active for larger companies selling beauty products that could be regarded as pseudo pharmaceuticals under Shopify’s definition. These beauty products are incredibly widespread and are stocked by countless stores in the retail and beauty industries.

Shopify client L’Occitane, a recent subject of a Shopify case study, sells brightening products that seem to violate the pseudo pharmaceuticals policy detailed to beauty merchants barred from Shopify Payments Gateway. Beauty Independent reached out to L’Occitane to learn if its transactions are handled by Shopify Payments Gateway and hasn’t gotten an answer to date. L’Occitane isn’t alone, though. Target and Glossier are listed on Stripe’s website as clients, and they have beauty products available on their sites with vitamin C.

“They are going after clean beauty,” argued Dickinson. Cockburn says, “Big beauty is threatened by the rise of green beauty. They know they can’t offer the products they offer now with fillers. They won’t be able to offer what these artisans offer and keep the prices low.” Yardy chimes in that the most frustrating aspect of the Shopify ordeal is that “there was no notice, and that they allow certain brands to still be able to use Stripe.”

Beauty merchants formerly relying on Shopify Payments Gateway continue to suffer consequences from being forced off the payments processor. Shopify charges its clients using outside payment processors 1% to 2% fee on transactions. On top of that transaction fee, Yardy divulges she had to shell out $200 to set up Authorize.Net, an alternative payment gateway, and pays $25 monthly for Authorize.Net as well as a 2.9% plus $0.30 per-transaction fee for it. Authornize.Net, which Shopify recommends to beauty merchants excised from Shopify Payments Gateway, hasn’t responded to a request for comment.

“It’s either we are going to pay the additional fees or we are out of business,” declares Yardy. Dominique Caron, founder of Apoterra Skincare, is billed 1% for external payment processing by Shopify and indicates the extra cost is a burden on a business that previously trusted Shopify Payments Gateway for transactions. She says, “Especially when you are running a small business, that 1% is maybe a photographer I couldn’t hire or money I can’t spend raw materials or packaging improvements. 1% of your sales can be a lot. Over a year, it really adds up.”