How To Select Locations, Teach Staff And Sell In The Spa Market

In our plugged-in, anxiety-ridden society, spas beckon us to chill out and pay attention to personal maintenance. Perhaps because their roles seem so critical today, spas are poised for growth. According to research firm IBISWorld, the health and wellness spa sector grew at an annual rate of 2.9% from 2011 to 2016 and is forecast to climb nearly 2% yearly through 2021. Women and, specifically, women baby boomers with discretionary income constitute the largest slice of spa customers. They patronize spas for relaxation, skincare results, socialization and simply fun. Brands that prosper in spa environments provide those benefits while satisfying the unique requirements of spa operators. Beauty Independent discussed the particulars of the spa business with seven experts to distill best-in-class practices for brands with spa aspirations.

Lay of the spa land
The spa market isn’t a monolith. It’s broken into several types of spas, notably day spas, resort spas, medical spas and destination spas. With nearly 17,000 units in the U.S., day spas are geographic giants in the market and account for about 80% of domestic spa locations. Coveted destination spas don’t even crack 1% of location total. Selecting your target spas boils down to synergies between the targets and your brand. “It’s important to start out defining what’s the brand’s story and how does it want to be reflected in a space,” says Bonnie Baker, managing partner and co-founder of Satteva Spa and Wellness Concepts.

“Brands get lost when they’re trying to be everywhere, and they’re not representing their story or the philosophy behind the brand. The story and philosophy give brands longevity and traction in spas.” Spas offer two opportunities for brand inclusion that aren’t mutually exclusive: retail and service. Retail is a small contributor to spa proceeds. Nancy Griffin, a principal at Contento Marketing, figures it’s typically responsible for 10% of a spa’s revenues, although Kim Collier, founder of JAMU and an educator with Blu Spas Inc., estimates retail sales can hit 20% to 30% of revenues in a healthy spa business. To make the spa channel worthwhile for brands, Griffin advises concentrating on spas grossing at least $1 million in annual revenues. Spas with that windfall often have three or more treatment rooms and are situated near or within a demand generator such as a hotel, fitness center or medical office.
The approach
Unlike the salon industry, the spa market isn’t dominated by product distributors that serve as gatekeepers. While distributors exist—Universal Companies is one—most brands handle spa distribution themselves. That means a ton of legwork identifying the right spa contacts. “When a brand enters a retailer with 140 stores, I’m dealing with a buyer and her assistant for those 140 doors. With spas, there are 140 spa directors that I’m dealing with for 140 spas,” says Kayla Childress, owner and founder of Mindful Luxury. Spa directors tend to be brands' go-to contacts, but they're not always the employees that vet brands. Spa retail buyers can be distinct from them. “Try to find the decision maker because otherwise you are just wasting your time,” says Amal Elbahnasawy, founder of Artisanskin and a former spa director. “If you don’t know the buyer or can't find them online, call and leave messages until you get an answer. Otherwise, you will get lost.”

Working at a large hotel company during her spa director days, Elbahnasawy didn’t have the power to approve a brand’s entrance into the spa, yet brands delivered products that crowded her office with little hope of breaking into the location. Brand founders frequently email spa contacts. An email alone isn’t usually sufficient to galvanize Jennifer Gallegos, aesthetics and skincare retail director at the spa International Orange. “For the most part, unless there’s something interesting that catches my eye and makes me read more, I disregard it,” she says. “If a full-size product shows up on my desk, I will look at the packaging and try it on my hand.” Kate Fish, founder of Katari, a skincare brand available at spas, pursues a novel strategy for getting in touch with spas: she shows up at them. “I want to see what the spa is all about and the dynamics in it,” she explains. “If you hit it off, that’s great. If not, you move on.” Many brands begin their spa distribution efforts at spas local to them, making visits not overly onerous.
Schooling spas
Education and training are paramount in the spa market. Fish detects a strong correlation between educational sessions at spas and her brand’s spa sales. “When you don’t know how to use the product, you are less inclined to use it,” she stresses. Fish stops by spas herself to conduct trainings and occasionally brings an aesthetician along with her for demonstrations. Blathering unrelated nonsense to spa staff isn’t advantageous to anyone. “The problem that we have run across is the person comes in, and they are just kind of selling the product or name dropping celebrities that use it. I have aestheticians that ask sophisticated questions. I really need somebody that is smart and talks about how the product works,” says Gallegos. Boring presentations will be ignored. “There is nothing worse than being stuck in a training session all day and being overloaded with information no one is connecting with,” says Childress. “The best trainings keep each and every person hands on.” Remember spas are compensating their staff members during your training sessions, so you want to make your trainings worth it for them. Leaving behind product is appreciated and ultimately boosts sales. Effective education is undone by constant spa staff turnover. Video trainings and occasional conference calls—Josh Rosebrook Skin and Hair holds monthly calls to run through the latest with spas and retailers—ensure the spa staff stays trained even if an employee or two departs.
Business in the back
Services make spas tick. Brands don’t have to have a presence in the treatment room, but it’s difficult to make a sales impact if they’re absent from it. Professional sizing is the first must-have for the back bar. Liter and gallon sizes are common, although Griffin notes a back-bar face serum container can be two to three ounces if the regular retail size is one ounce. Professional formulations amp up the active ingredients to allow spas to differentiate retail products from what’s used in services. Brands directly convert their wholesale pricing to the larger sizing. Childress underscores that professional bottles should be clearly labeled as, for example, cleansers or body lotions to avoid aestheticians fumbling around in the treatment room. Professional packaging that mimics the look of retail products strengthens branding. A treatment protocol is another must-have for services. Bringing on board a spa professional, maybe an educator or aesthetician, to develop a protocol is valuable if no employees at the brand have prior spa experience. Treatments integrating your brand should highlight hero products. Griffin says a minimum of three products should be incorporated into a treatment. A facial might feature at least a cleanser, mask and moisturizer. Collier discloses there’s generally $5 to $7 wholesale worth of product in a 60-minute $75 treatment. “There are products with gold leaf in them or CBD that are higher price points, so they could be twice that amount or even $20 per treatment client,” she surmises. “The really smart companies with well-thought-out treatment experiences include a gift with service or samples so the client can continue use of the products. That can also be factored into the cost of the treatment.” It isn’t easy to crack service menus as spas have a lot invested and riding on existing menu choices. Childress suggests creating seasonal or deluxe treatments that fill holes in spa menus.
Setting expectations
Sensational sales at spas don’t happen speedily. Extended horizons for launch and profit are customary. “Spas have to update their menus, protocols and websites to incorporate a new line, and they have to do significant training,” says Childress. “Changing lines for them is tedious, and they don’t like doing it.” Eight months isn't a terrible length of time for getting picked up by a spa, and it can take three years. The costs to establish and retain spa distribution are extensive. Childress recommends brands head out on the spa trade show circuit and set aside a budget of roughly $20,000 for it. Live Love Spa, Spatec, Spa Buzz, and the ISPA Conference and Expo are among the spa trade show mainstays. An independent spa sales representative can cost a brand approximately $75,000 to $100,000 a year, and an independent educator rings in at $30,000 to $50,000. Reps and educators can be extremely constructive for spas. Gallegos says, “I have had brands in the past drop the ball on training. They don’t have a rep in our area or they can’t get anyone out here, and the line flops.” At the outset, it’s improbable spas will bring in an entire brand assortment into their retail areas. Gallegos is inclined to test star items initially, and PR buzz can be crucial. “A brand like Vintner’s Daughter that has its marketing game on pointe, that really supports our sales,” she says. 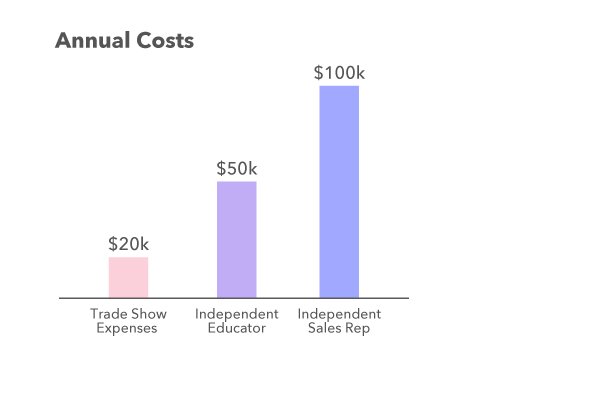 Sales performance at spas varies widely. Childress details a brand with a few SKUs at a spa may generate monthly reorders of $300 to $500, but sales climb to thousands monthly for a skincare line with good representation in a spa’s treatment rooms. Patience is imperative. “The first two to three years can be extremely painful with slow and steady sales,” says Childress. “Stick-to-itiveness is the key to seeing success in the spa channel.”
The spa of tomorrow
Positioning your brand as integral to the future of the spa market may make for fruitful spa introductions. Griffin mentions wellness programs are taking hold in spas. Brands broadening the wellness conversations at spas such as sexual health specialist Good Clean Love are sought after. Griffin also emphasizes farm-to-skincare stories can be compelling. “Spa goers really want to know what goes into what’s being applied to their faces or bodies. They want to know if you saved the rainforest,” she says, half-jokingly. “A lot of indie brands have really great stories they can share in spas.” Collier points to advanced science, natural medical remedies and customization as spa trends on the upswing. “In years to come, we will see the integration of medical and relaxation spas where people can go for more diagnoses. There will be an aspect of high tech, high touch and personalization,” she conjectures. “And I think we are going to be seeing a lot more with natural healing, hot springs and CBD. People are taking responsibility for their health and wellness. With our aging population, there will be more geared toward better blood circulation and addressing ease of movement.” Big missions aren’t mandated, though, for brands to make spa progress. “Niche is always a good way to go,” says Griffin. “You can focus on a condition like swelling in the legs or callouses on the feet. Have that hero product that everyone talks about.” An earlier version of this article appeared on September 27, 2017.