Chris Hemingway acknowledges he’s jumping into a skincare category that’s quite crowded. Hesitant about the move, he compares it to starting a hit television show long after it dominated the pop culture zeitgeist. “It’s basically like, ah, I’m so behind, I’m never gonna catch up,” he jokes.

To Hemingway, skincare felt complicated, unapproachable, and more pressingly, too gendered. “I don’t really identify personally with hyper-feminine products, but I also have a real aversion to hyper-masculine products,” he says. “And my thing is everybody has skin, skin health is important for everyone and the gendering of the skincare space leaves behind everybody who doesn’t identify with that binary.” His solution to the either-other dilemma is Taylor of Brooklyn, an inclusive natural skincare brand for “everybody and every body.”

Hemingway worked on the brand for two years prior to its March launch. He tapped into his background as a graphic designer and art director to create the lively green packaging, picked as a nod to the pride flag, and the handwritten logo. He chose Seattle-based queer artist Diego for the illustrations. “I knew that the packaging had to have images of the community that I’m trying to center and celebrate, so having people of color, having people who were clearly gender nonconforming or a part of the queer community, that was all super important to me,” says Hemingway. “I really want people to understand, when they pick this up, that this is for you and you can see yourself in this.” The name, Taylor, was selected for its ambiguous nature and its ties to Hemingway’s past romantic partners. Brooklyn is where he currently resides.

Gender boundary-crossing beauty has been on the rise in the past few years, but Hemingway thinks there’s still room for a brand like his in the natural space. Taylor of Brooklyn’s lineup includes three oils priced from $45 to $50—Vers, Thirst Trap and Soft Butch—along with $31 foaming powder cleanser, Mug Scrub. The products use ingredients such as shea and moringa oil with strong ties to communities of color. The formulas don’t contain added fragrance, another gendering component Hemingway wanted to steer clear of. 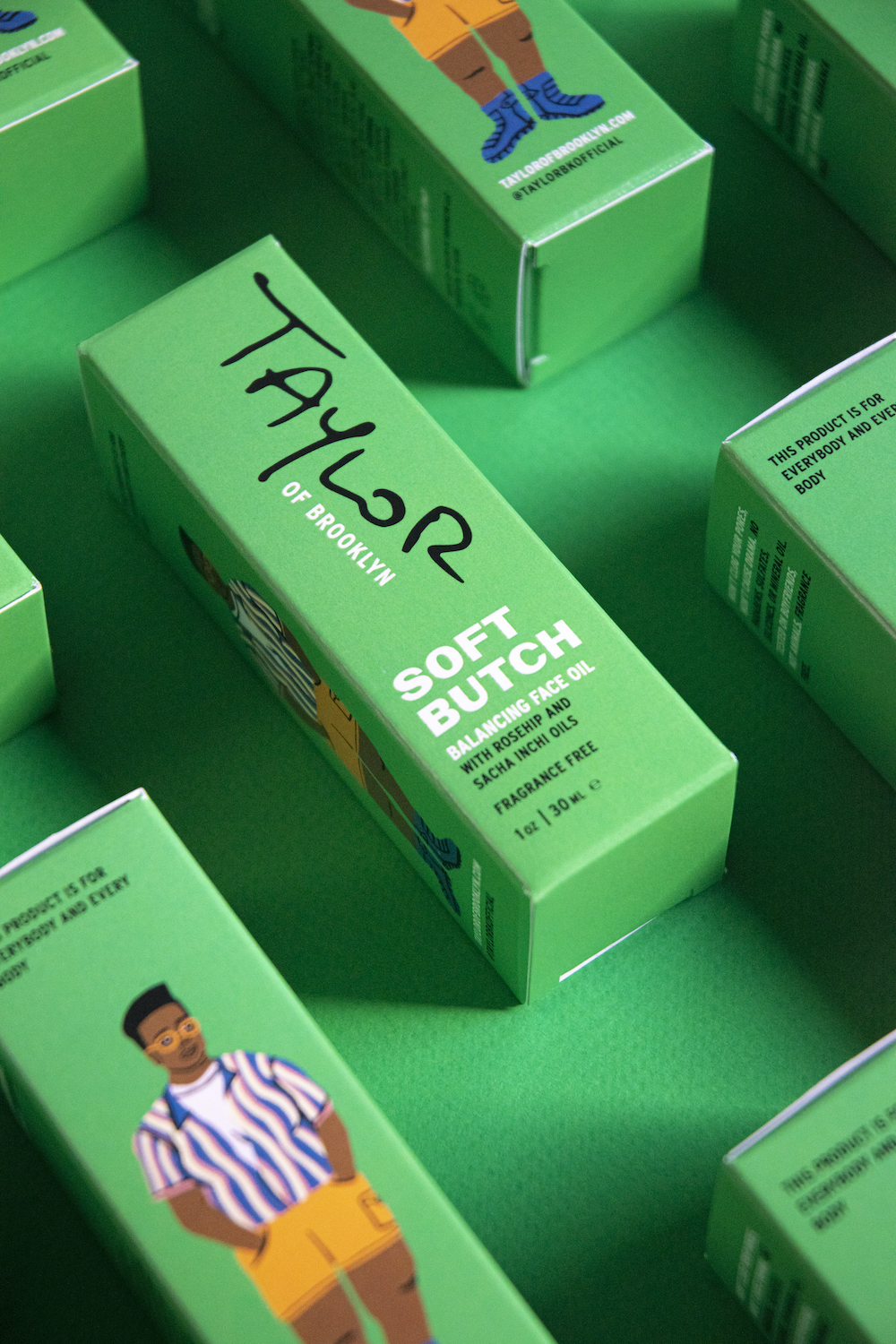 “To me, the smell of the actual materials is, No. 1, very light and very clean on its own but then it sort of fades away and feels like you. I like having that connection to the actual materials, I’m not trying to cover them up,” says Hemingway. “I want it to be clear that this is something that is based in nature, it’s based in the history of these materials and now it’s for you. We, as people of color and as queer people, are a part of that history and that tradition of making these things and using these things and there’s no reason not to connect to them as they are.”

Taylor of Brooklyn’s oils have premiered on Urban Outfitters’ website. Hemingway’s goal for its distribution is to be a balanced mix of direct-to-consumer and retail. “The products were designed to be seen in person and the boxes were meant to be handled and read because they are, not to toot my own horn, very funny,” he says. “I think it makes a really important statement to have a brand that is very clearly for queer people and people of color and anybody else who wants to be our friend out in the world where anybody can see it.”

Only five months into Taylor of Brooklyn’s business, it might seem Hemingway is moving at full speed, but he stresses he’s not afraid of slow growth. He runs Instagram ads for the brand, but a lot of incoming interest has been organic. He has plans to participate in Credo For Change’s largest BIPOC cohort ever later this year and is focused on putting out products that are useful to his community.

“I have plans, I have things that I wanna do, but I’m not really looking to tell people what they need and I don’t feel the need for the brand to explode onto the scene all of a sudden,” says Hemingway. “I’m happy to be entering into this space because I think that this is a perspective that’s important to hear and for people who deserve to be celebrated.”