Indie Beauty Expo is traveling to London next year for its first international trade show.

Taking place in October at The Old Truman Brewery, the London edition of Indie Beauty Expo (IBE) will present 80 to 100 emerging beauty brands to European retail buyers, editors, influencers and beauty shoppers. IBE has already secured 20 exhibitors for the trade show, which is a precursor to additional foreign expositions.

“We are just getting warmed up. We believe Europe warrants two shows, and we are in the early stages of planning expansion to Asia,” says Nader Naeymi-Rad, who founded IBE with Jillian Wright. “IBE could put on between seven and 10 shows internationally. We will see how London goes, and we will narrow down our options for future European cities.”

“Our goal is to nurture independent beauty brands. We’ve been able to do that in the U.S., and the next step is to foster the indie beauty community globally,” says Wright. “Outside of the U.S., we will connect American brands with international retailers and showcase international brands to realize their ambitions of store placements. We are intent on building relationships around the world to champion indie beauty brand founders no matter where they’re from.”

“We are intent on building relationships around the world to champion indie beauty brand founders no matter where they’re from,” says Wright.

Before selecting London as a destination for IBE, the trade show company gauged indie brands’ interest in IBE extending abroad. In a survey following IBE’s Los Angeles expo in January, 92% of exhibitors expressed enthusiasm for participating in a European trade show. After IBE Dallas in May, 73% of exhibitors reported they were interested or highly interested in a European branch of IBE.

IBE chose The Old Truman Brewery as its London venue because it’s in a chic, bustling area of the city teeming with restaurants and stores. It also provides a blank slate that IBE can fill to create the elevated experience it’s honed in Los Angeles, Dallas and New York. Like those U.S. trade shows, IBE London will be a two-day trade show preceded by CONNECT INDIE, IBE’s educational arm that drew over 400 people in New York last week. CONNECT INDIE’s programming includes panel discussions and classes tailored to beauty entrepreneurs. 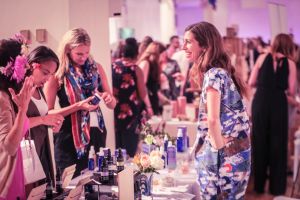 Naeymi-Rad believes IBE’s approach complements Europe’s longstanding tradition of well-crafted, artisanal merchandise. However, North American brands seeking international exposure at the London event should be aware that preparation is necessary before exhibiting internationally. Brands should have European Union certification finalized, packaging suitable for languages spoken in the E.U., pricing relevant for the European market, and be ready to scale abroad.

IBE’s international move succeeds the trade show company laying a solid foundation in the U.S. Launched in 2015 with a one-day expo in New York, IBE stretched to three, three-day domestic events in 2017. Revenues are forecasted to surge 45% this year over last year, and IBE has registered a compound annual growth rate of 246% from 2015 to 2017. Across its three U.S. trade shows, 400 brands exhibited in 2017, up from 230 in 2016 and 80 in 2015. Self-funded IBE has been profitable since its first year in business. “We have aggressive growth plans, but we also cherish our independence. That is why we make every penny count,” Wright declares.

The proliferation of IBE expos gives brands a chance to be exposed to new audiences. “What we have learned and what’s been validated is that there are meaningful, incremental opportunities in every IBE location,” says Naeymi-Rad. “There are a lot of brands, buyers and press that are more likely to come to an event that’s local to them and come with more interest. Accessibility and frequency are both key to helping our brands get to a much broader set of buyers and press.”

“Accessibility and frequency are both key to helping our brands get to a much broader set of buyers and press,” says Naeymi-Rad.

For retailers, IBE’s leap abroad could introduce them to brands they might have difficulty running across otherwise. Finding emerging brands is critical as retailers attempt to differentiate themselves from competitors and quickly react to demand for indie beauty brands. “In the world of fast beauty, buyers are looking to rapidly refresh their collections,” says Naeymi-Rad. “It used to be every nine months, and retailers now, in the case of online, want new brands every few weeks.”