Do you want your deodorant to be a consummate underachiever? Of course not.

Type:A, the opposite of a personal care slacker, is joining the ranks of aluminum-free odor busters on a Tracy Flick-esque mission to outclass the rest and conquer store shelves starting with Credo by June. Formulated with a performance-driven, safety-first approach, its debut deodorants are the herbal citrus-scented The Visionary and unscented The Minimalist, both of which are priced at $10 for a 2.8-oz. size and $6 for a 1.2-oz. size.

“We named the brand Type:A because, with every product, we will exceed expectations with a smart formula and smart user experience,” says Allison Moss, founder of Type:A and a beauty industry veteran who’s held marketing positions at Jurlique, Estée Lauder and L’Oréal. “We pay attention to every detail, and we are going to continually commit ourselves to finding ways to improve.”

Speaking of details, Moss evaluated more than 100 packaging options before settling on the gender-neutral tube housing Type:A’s deodorant. Customers swipe on the brand’s deodorant like a stick, and the tube features an applicator perforated by three holes to let the formula through. With sticks commanding over half of the deodorant and antiperspirant market, according to Moss, she admits she was concerned about presenting a tube format. However, in a 63-person test during the summer, 87% reported satisfaction with the Type:A’s tube.

“We are taking a gamble because Americans can be reluctant to change form, but the test gave me comfort that there isn’t going to be an aversion to the tube. If anything, it signals innovation,” says Moss. “My concern has completely gone away because of the user test.”

The true differentiator of Type:A is what’s inside the tube. Its dry touch cream formula is sweat-activated or, to elaborate, moisture stimulates the formula in a manner that mimics a time-release effect. Glycerin is a critical component of the formula, and it’s paired with zeolites, corn starch, silver, zinc, baking soda and arrowroot powder. Because of the sweat-activated character of the formula, Moss underscores Type:A relies on less baking soda than its competitors, decreasing risk of irritation.

Type:A’s formula is designed not to leave marks. It promises wetness protection often lacking in the natural deodorant arena. Natural deodorant brands frequently discuss a detox period of intense smell and sweat as people leave behind antiperspirants, but Moss notes there’s no detox phase set off by switching to Type:A. She reveals test users felt they were protected from odor with the brand’s deodorant and could go to their offices without worries their armpit fumes would offend colleagues.

“I went into this looking at how do we formulate the highest performance, safer deodorant out there, but the user experience is equally important and critical to the overall success to the product,” says Moss. “If it’s not enjoyable to use, if it’s wet or goopy, irritating, sticky or messy to apply, it’s not going to be a winning product, and it will have a limited audience.”

Moss describes Type:A deodorant as powered by natural ingredients and incorporating safe synthetics. Synthetic ingredients in the formula include glyceryl stearate, heptyl undercylenate, diisopropyl adipate and dimethicone. Type:A lists deodorant ingredients on its website and explains the reason for each one.

“The brand is in the natural deodorant category and clean beauty space, but we aren’t being an overtly natural brand,” says Moss. “We deliver products that are 100% safe and extremely effective, and we make them as accessible to as many people as possible. We want to offer a healthy alternative where you are not having to sacrifice performance or user experience from what you’ve been using, potentially an antiperspirant or another natural deodorant.”

Consumers displeased with natural deodorants in the past are early targets for Type:A. The brand is initiating a major sampling program to encourage trial and convince them to convert to its merchandise. Instead of foil packets, Type:A is sampling with recyclable cards that replicate its tube application on a smaller scale. The brand is also ramping up digital campaigns and influencer outreach to spread the word about its arrival. 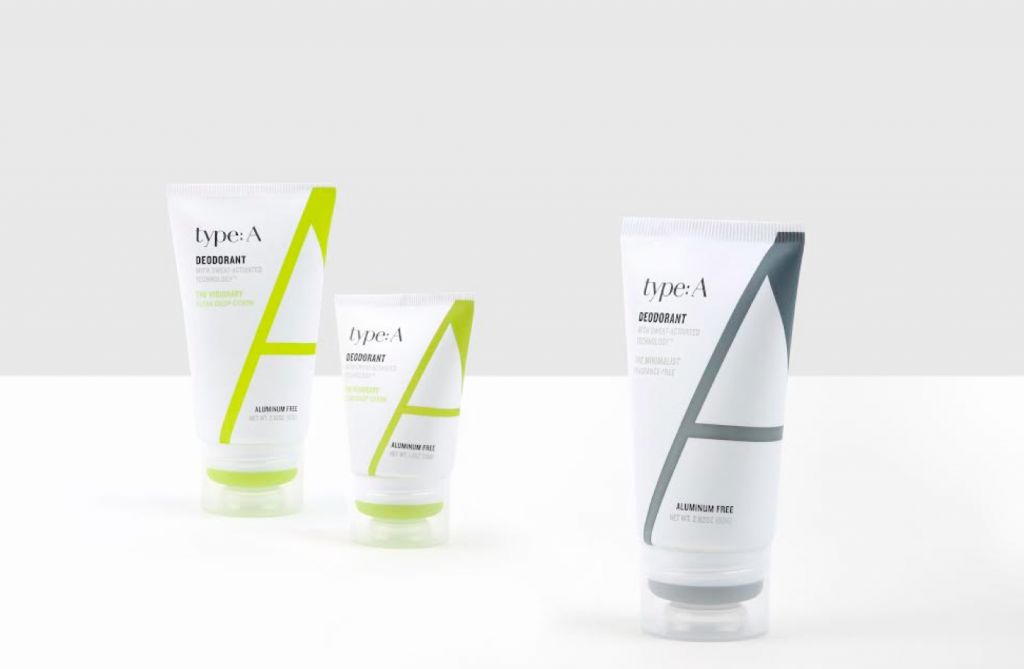 Partially to fuel marketing, Type:A is currently fundraising with the aim of securing $500,000. “Our biggest challenge is cutting through the clutter,” says Moss. “Every day, a natural deodorant pops up. There are a lot of little brands trying to get attention. You can’t just be the one shouting the loudest, you have to put proof behind it. We are trying to get into as many hands as possible and are leveraging social media. We’re working with key partners, and Credo is one of the first key partners to give us a boost in terms of credibility and discoverability.”

While Type:A establishes a presence at upscale green beauty retailer Credo, Moss believes the brand can break into mass retailers, too. “As I developed the brand last year, I envisioned mass retailers really trying to grow the natural deodorant segment, and diversify the types of formulas and brands they have on shelf. Over the course of 2017, that played out most obviously with Schmidt’s gaining traction,” says Moss. “Even though it is owned by Unilever now, there’s room for continued category expansion and another alternative alongside Schmidt’s.”