With the chance that the United States will plunge into recession due to towering inflation, increased interest rates, stock market tumbles and economic volatility rising, American businesses are grappling with what defensive—and offensive—moves they should be making. Retailers have already felt the squeeze from bloated inventories and shoppers trading down. If the first half of 2022 is any indication, the second half of the year could be a choppy one. Below, we look back at last month’s retail news to provide perspective for the future.

In June, the Federal Reserve took the most aggressive measure it has yet to temper inflation by raising rates .75%, the highest hike since the mid-1990s. As a result, economic growth is projected to slow. Economists have slashed their forecasts for gross domestic product (GDP) from 2.8% in March to 1.7%. Some fear a recession could occur next year, but predictions are all over the map.

Trouble was brewing before last month. In May, retail spending took its first month-over-month dip for the year. Retail and food sales decreased by a seasonally adjusted .3%, according to the U.S. Census Bureau. The figure is a measure of spending at stores, restaurants and online, but isn’t adjusted for inflation.

To offset persistently high prices at gas stations and grocery stores, consumers cut back their spending on discretionary items like furniture and electronics. A sharp dive in car sales was the main culprit in pushing down retail spending for the month, aided by lofty prices and low inventory. In May, American consumers spent 43% more on gasoline and 9% more on groceries than they did a year ago.

In early May, Mastercard SpendingPulse reported e-commerce transactions slid 1.8% year-over-year. As e-commerce sales drop, the stocks of e-commerce players like Etsy, Shopify and Wayfair have been walloped. In-store sales were a bright spot, jumping by 10% as consumers continued their march back to brick-and-mortar locations.

Despite the brick-and-mortar traffic, the retail industry has been steadily shedding jobs beginning in February. Over 60,000 retail jobs were lost in May as consumers pivoted spending to restaurants and travel. Meanwhile, the labor market added another 390,000 jobs in the hospitality, construction, transportation and professional business services industries. 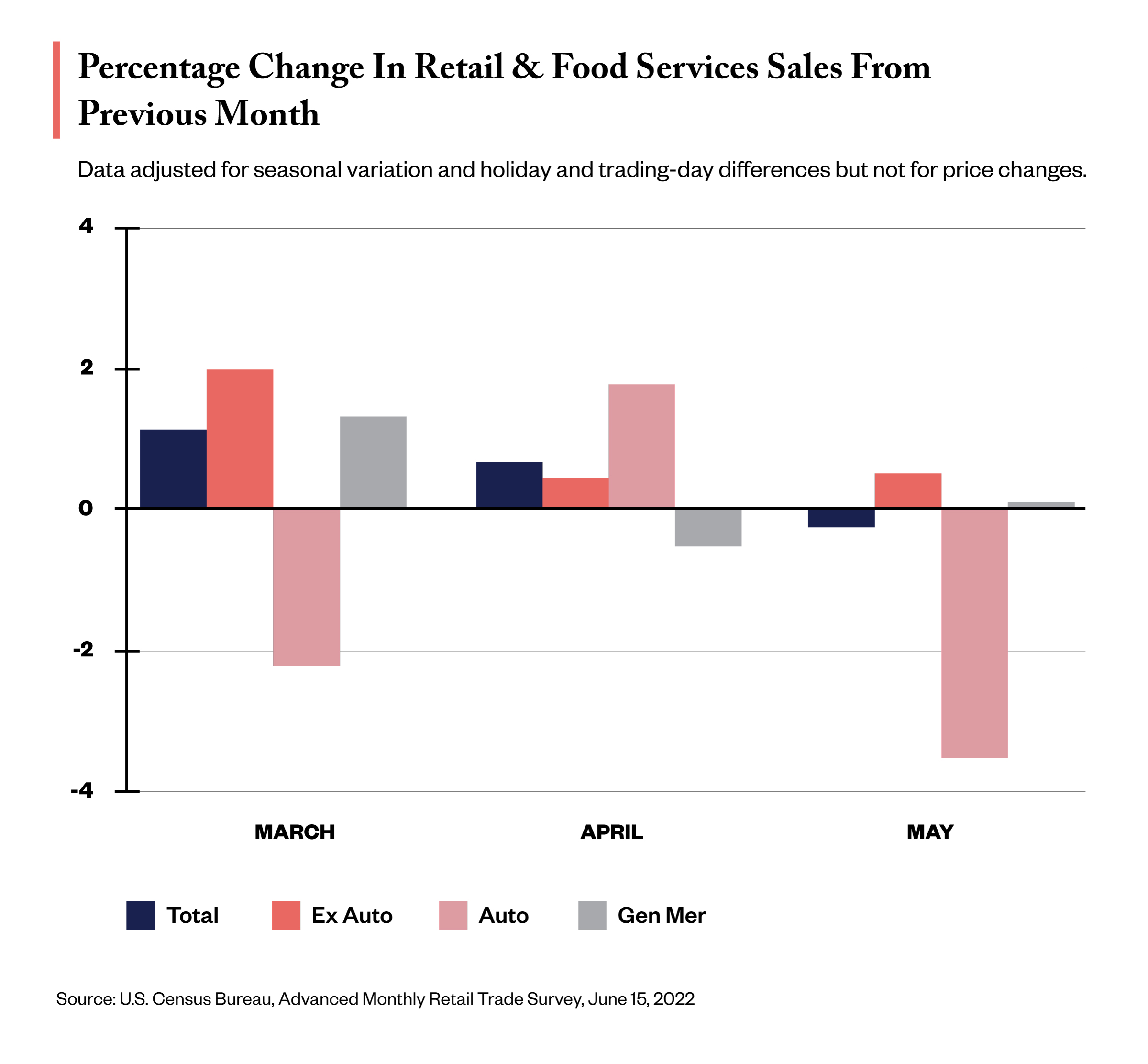 The biggest beauty news to hit the headlines last month was Revlon’s bankruptcy. It came after years of slumping sales and restructuring woes. Weighed down by $3.7 billion in debt, Revlon was strapped by financial constraints in its efforts to innovate or acquire brands that could innovate for it. Competitors like Estée Lauder and L’Oréal have gained while Revlon has stumbled, and its space at mass-market retailers has shrunk.

When the pandemic arrived, Revlon’s debt-addled structure was particularly cumbersome, and it couldn’t manage to successfully navigate macroeconomic challenges and kinks in the supply chain. The nearly 100-year-old legacy cosmetics company will borrow $575 million to buttress its business operations while it restructures again.

June brought an executive shake-up to the world’s leading beauty specialty retailer. Former president and CEO Martin Brok departed LVMH Moët Hennessy Louis Vuitton-owned Sephora at the end of last month after nearly two years on the job. According to an internal release cited by the publication Women’s Wear Daily, Brok’s departure was “due to a divergence of views.”

Chris de Lapuente is now back at the helm of Sephora after a stint as the chairman and CEO of LVMH’s selective retailing division, where he also oversaw perfumes and cosmetics. De Lapuente was CEO of Sephora for a decade before handing the reins over to Brok in September 2020.

Brok worked to expand Sephora’s global reach. The retailer partnered with Zalando, the German fashion and lifestyle e-tailer, in June 2021 to bring its prestige beauty assortment to European customers. In September 2021, it purchased Feelunique, the British beauty e-tailer, to secure a path forward in the United Kingdom, where it’s lacked a physical presence in recent years. Sephora is reportedly opening brick-and-mortar stores outside of London as part of its U.K. reentry strategy.

As borrowing conditions sour, retailers are turning away deals. In the wake of two takeover bid rejections in January it deemed too skimpy and months of speculation over the potential buyers that would make the next bid for the beleaguered department store, Kohl’s repeated history in June by rejecting a proposal from The Vitamin Shoppe owner Franchise Group.

Noting the Fed’s interest rate hike, Franchise Group reduced its takeover price to $53 a share from $60 a share—and Kohl’s wasn’t impressed. In an overview of its review process explaining the reasons it rebuffed Franchise Group, the retailer stated it did so “in light of the current financing and retail environment, which has significantly deteriorated since the beginning of the process.” Kohl’s emphasized it remains opens to bids. So, the speculation will go on.

Earlier this year, Walgreens Boots Alliance floated that it was looking to divest British pharmacy chain Boots and beauty brand No7 to concentrate on the U.S. healthcare sector. Not so fast. It recently reversed the plans and committed to holding onto Boots. While there was robust buyer interest, the stubborn economy rendered the bids unfavorable as access to affordable financing options crumbled.

American private equity firm Apollo Global and Indian conglomerate Reliance Industries were the last entities in the running to scoop up Boots, operator of over 2,000 brick-and-mortar locations in the the U.K. Boots was valued at roughly $10 billion during a Goldman Sachs auction in February.

Boots’ comparable retail sales increased by 24% in the first quarter of 2022, but shares of Walgreens Boots Alliance were down 13.5% in June in response to the canceled sale as well as investor skepticism about its performance in the back half of 2022.

It hasn’t gotten better for Target since its woeful first quarter earnings. The mass-market giant announced it’s taking additional markdowns in discretionary categories to lighten its inventory levels and tighten its supply chain. Profit margins are expected to suffer further following a roughly $1 billion collapse in its operating profit in the first quarter.